Total hip replacement surgery (THR) is one of the most successful and life changing operations there is. Many hundreds of thousands are performed each year worldwide. However as techniques, materials and implants are improved and peoples’ expectations about their quality of life increases, more THR’s are being performed on an ever-younger population group. This coupled with the ever-increasing average life expectancy of the population results in more demands on the implants to last longer than ever before.

However artificial joints will eventually fail. Often this is as a result of loosening between the implant bone interface and is often related to wear of the bearing surface. The most common bearing surface, particularly in older hip replacements is polyethylene (PE), a form of hard-wearing plastic. Modern polyethylene used in joint replacements is treated by various procedures during its manufacture to minimise wear, such as annealing and crosslinking of the PE molecules. However PE used in early hip replacements was prone to create more microscopic wear particles which are thought to induce an inflammatory response that results in softening and destruction of the bone around the implant. This can cause loosening and failure of the joint replacement.

What is revision THR?

Revision THR is where the failed existing implant is removed and a new one is implanted into the remaining bone stock.

What are the challenges of revision THR?

The main objective of revision surgery is to achieve stable fixation of the new implants to the host bone and achieve a stable hip that is less likely to dislocate. If these objectives are achieved then hopefully function will be restored and pain improved.

Revision surgery is always much more challenging for both the surgeon and the patient than the first time joint replacement (primary surgery) as some degree of host bone is always lost. Also the surgery is taking place through abnormal scarred tissue with disruption of normal anatomy which is an inevitable result of the primary surgery. The increased operative time and difficulty inevitably lead to all the perioperative risks of the primary surgery (see Total Hip Replacement FAQ) increasing, especially infection and dislocation of the hip.

Loss of bone can occur either around the acetabulum (cup) or the top of the thigh bone (femur) or as is often the case, on both sides of the hip joint.

In order to meet these challenges there are various weapons in the revision surgeon’s arsenal.

These include specially designed modular implants that can be adjusted for ‘best fit’ to the remaining bone stock, replacing lost bone with donated boned graft, using porous metal blocks and implants to fill bone defects and in severe cases 3D printing titanium implants to replace large areas of pelvic bone loss. If femoral bone loss is severe then sometimes part or all of the femur itself needs replacing with a “mega prosthesis” (partial or total femoral replacement respectively).

If the bone defects left once the previous implant has been removed are contained i.e. they are surrounded by intact bony walls then donated bone (ground up femoral heads removed at routine hip replacement surgery) can be impacted into the defects to restore bone stock and help give volume and strength back to the bone. The bony ‘granules’ lock together mechanically much like impacted gravel found supporting railway sleepers. With time the newly impacted bone incorporates with the host bone and undergoes remodelling. This has the added advantage of leaving more bone in place for any possible further revision surgery in the future. The revision implants can then be placed onto the newly impacted bone.

If large uncontained defects are present in the pelvis around the acetabulum (cup) then these can be filled with porous metal implants. These are attached to the pelvis by large bone screws for primary stability but with time the host bone grows into the porous metal which in theory becomes incorporated into the host skeleton. These often act as void fillers and aid conversion of uncontained defects into contained ones in acetabular revision surgery, thereby allowing safe and stable insertion of the revision cup. They are often used in conjunction with IBG to convert uncontained defects into contained ones.

The implants come in various shapes and sizes for best fit and are made of porous metal (tantalum or titanium) with a structure and modulus of elasticity similar to that of normal bone, with a very high coefficient of friction to allow for a scratch fit against the host bone, aiding stability and bone ingrowth.

Major challenges of revision surgery include achieving good fixation into the remaining bone stock as well as achieving a stable hip that is less likely to dislocate. The risk of dislocation after revision THR is higher as the surrounding soft tissues (muscles, ligaments and joint capsule) are compromised as a result of multiple surgical approaches and scarring.

There are various acetabular cup designs that offer larger cups or shells to fill bone defects with an outer porous metal covering (similar to the augments and can be used in conjunction with these to fill defects). These often have multiple screw fixation options to grab as much remaining bone stock as possible. Different cups and liners can then be inserted into these shells depending on the degree of constraint needed to achieve stability.

If it is thought there is a risk of instability then a more constrained type bearing can be used where the ball of the hip joint is partially of fully captured within the cup eg Dual Mobility or a fully constrained cup respectively.

Femoral bone loss often occurs at the top of the femur as a result of loosening of the femoral stem. This can result in the loss of the normal ‘tube shape’ of the bone making it difficult for the top of the femur to support the new implant. If the bone loss is significant, bone can be impacted into the femoral canal in a similar way to the acetabulum to re-shape the centre of the bone, restore thickness to the walls of the femur and thereby offer support to the revision femoral implant. Revision femoral implants often have longer stems compared to the primary implants in order to gain as much stability as possible from the remaining femur. When used in conjunction with IBG the long stemmed femoral implants are often cemented in place. When successful the new bone helps the femur to ‘heal’ and remodel and ultimately regain much of its original structure and function.

However IBG is not always necessary and if good bone stock remains lower down the femur (distally) then modular uncemented implants which are inserted by scratch fit are placed into the good bone further down the femur away from the area of bone loss (distal fixation).

If bone loss in the femur is extensive which can be the case after multiple revision surgeries or as a result of a periprosthetic fracture then as a last resort part or all of the femur can be replaced in its entirety with a distal/proximal or total femoral replacement respectively.A 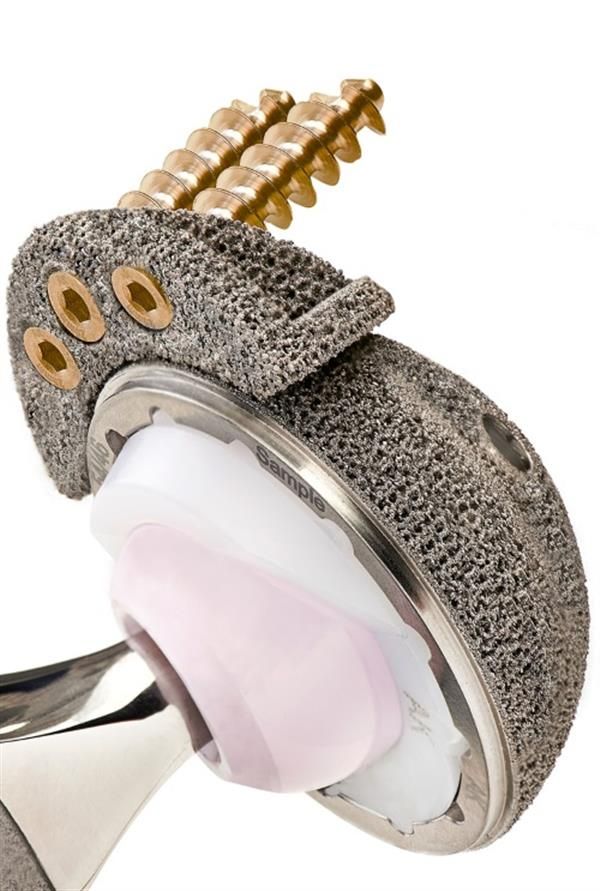 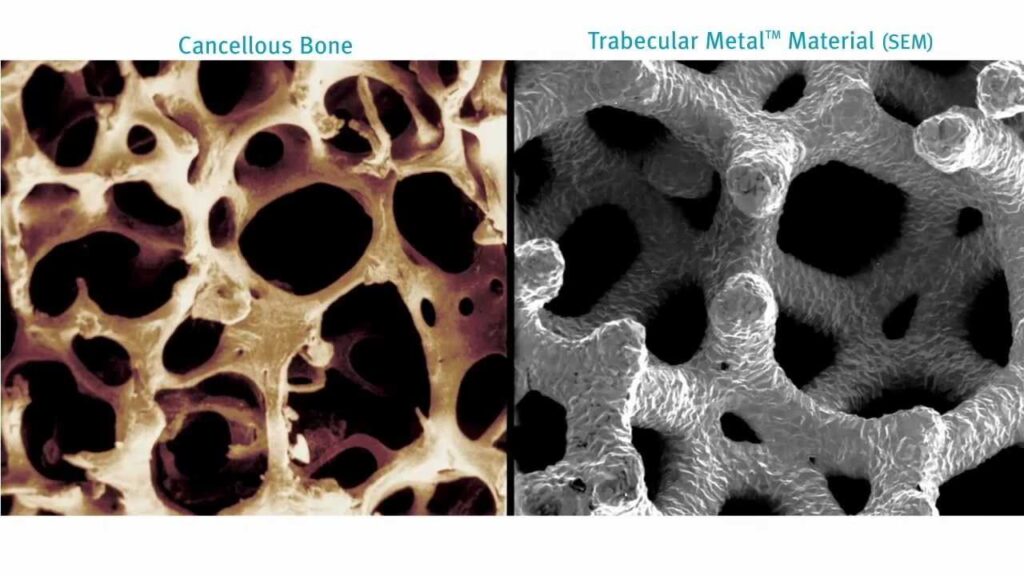 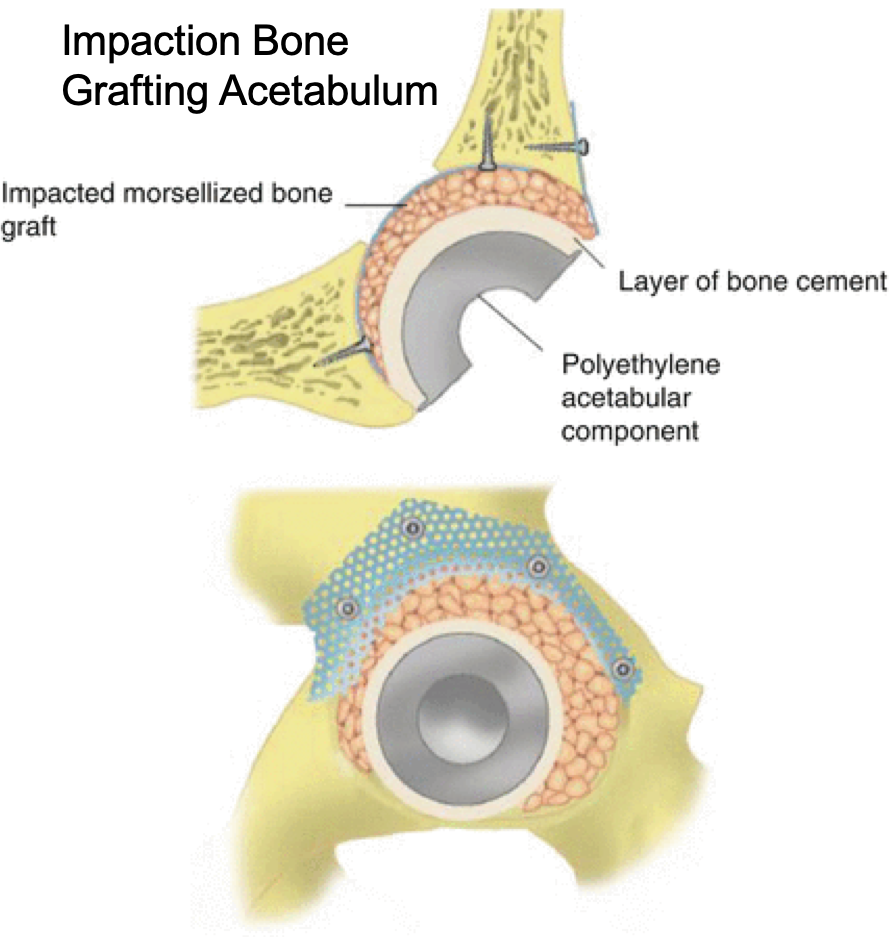 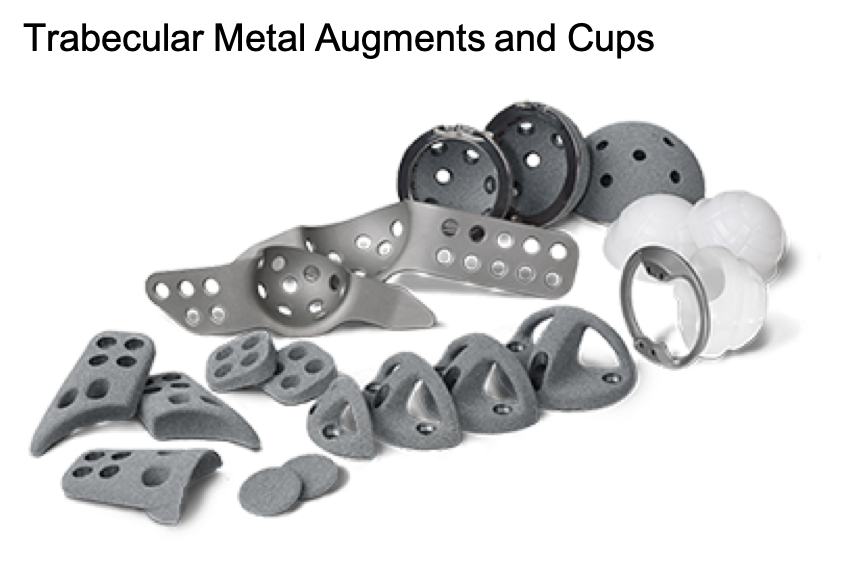 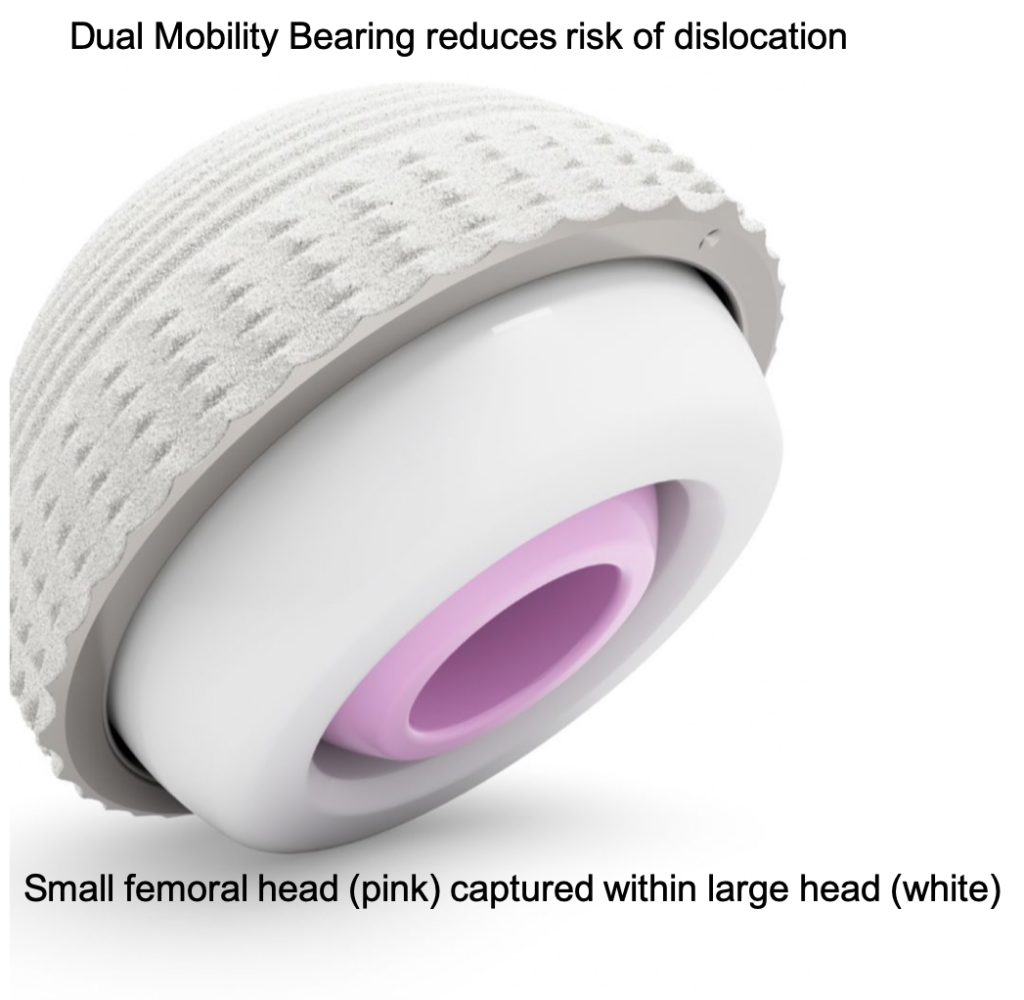 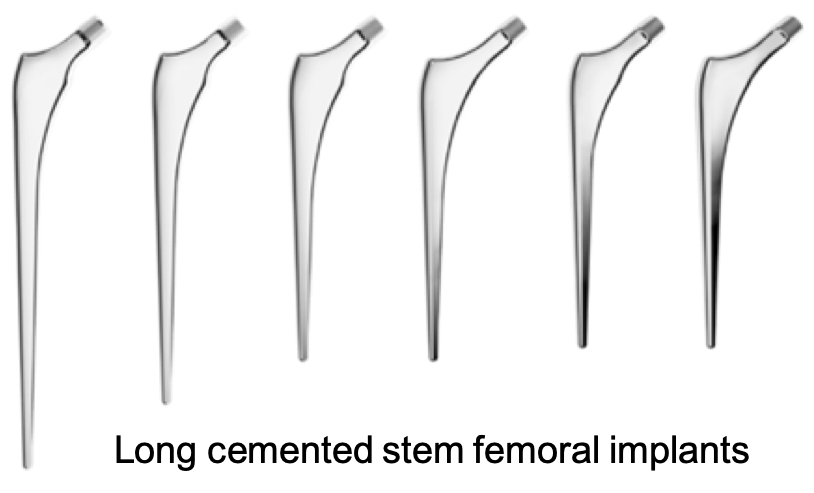 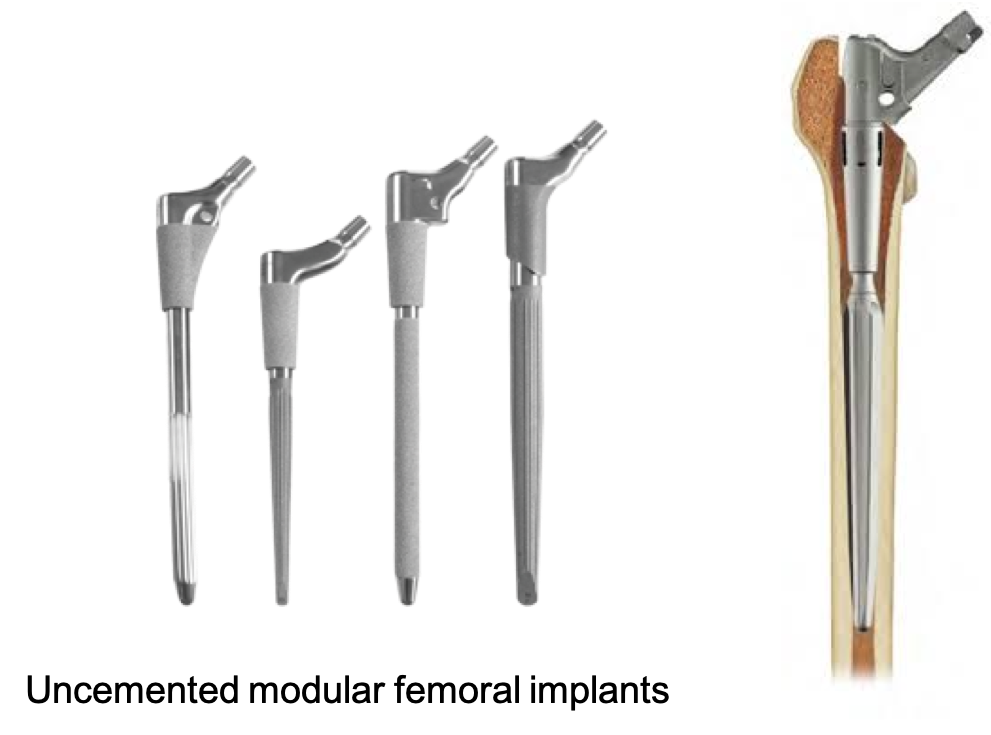 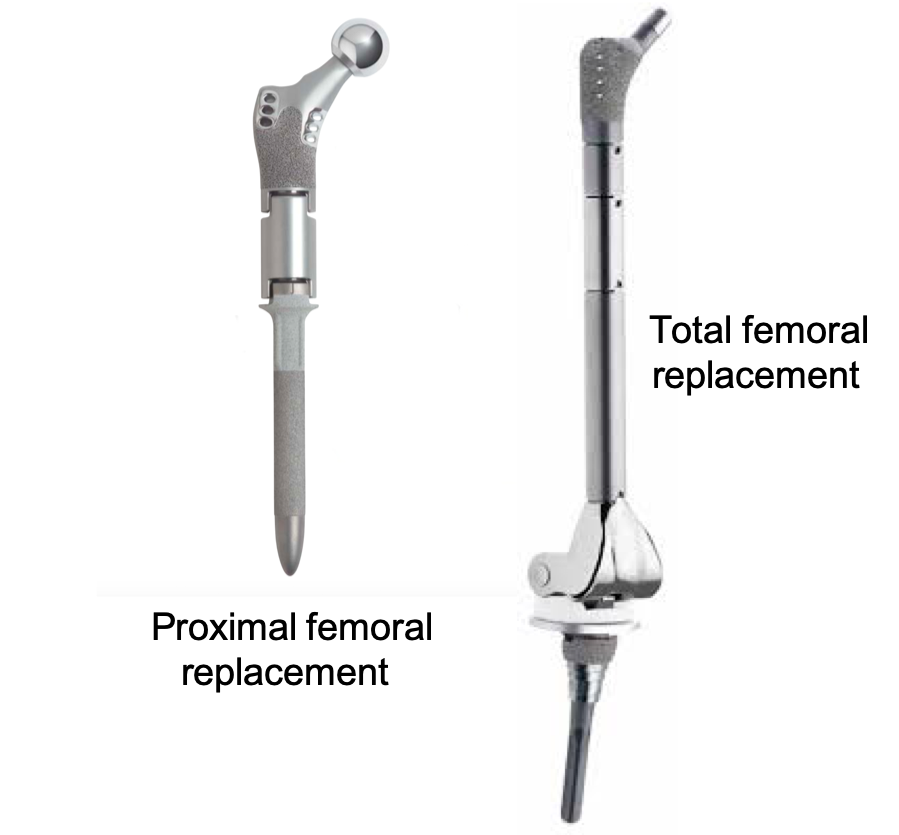 
In every respect I received first class treatment and pre- and post-operative care was promptly, efficiently and sympathetically delivered. The nursing and physiotherapy was of the highest order. Many thanks and congratulations to all concerned.
PB
Total Hip Replacement
 5/5
Dear Mr Brew,
‘I was delighted with the level of care I received from everyone at the Yorkshire Clinic’.

I couldn’t have been happier with the care and support from everyone and at every stage of my care program.
I find it hard to believe that I have gone from severe pain day and night to feeling almost like new in such a short time.
JGL
Total Hip Replacement
 5/5
Since my hip operations I have never looked back as I have no pain at all , thanks to you Mr Brew!

The nurses and the physiotherapists were all very nice to me and took care of me while I was in the Yorkshire Clinic. I thank everyone that took part in my recovery, especially Mr Brew. 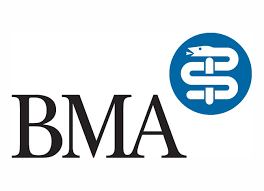